Joanne Clement : Herald Sun : Not What The Doc Ordered

Home » Joanne Clement : Herald Sun : Not What The Doc Ordered

Joanne Clements, up until now a gutter journalist for the Herald Sun, has exceeded her depraved, disingenuous, immoral lies and is known now as Sewer Rat of Journalism.

She wrote a story published in Sunday’s Herald Sun which she wrote “Not what the Doc Ordered” based on her co-conspirator gutter journalist Mark Dunn.

She did not give the target of her vitriol any opportunity to reply, so her story was full of lies.

HERALD SUN = NEWS OF THE WORLD

Clements is an example of disgusting lies and if Rupert Murdoch was aware of the lies propagated by Clements, Dunn and Saturday’s Chief of Staff, he would order their immediate dismissal.

To write a one-sided story full of lies when the truth was made available to the newspaper is inexcusable. How can a journalist attack an individual without any attempt to obtain the other side of the story, which proves Kirk of being a liar.

This disgusting story did not include a third party’s summary, that together with all the text messages from Kirk which proves that she and the disgusting Clements, liar extraordinaire and sewer rat of journalism, making her one of the worst journalists in Australia.

She, giving no opportunity for her target to reply, did not include the true facts that Kirk, the gold digger, refused to give an interview to the Herald Sun without being paid. She had her U.S. based publicist demand $1,500 for an interview. Features were organised for Kirk to appear in a number of magazines.

She wanted to tell a story to T.V. about her relationship with one of Australia’s wealthiest billionaires, in his late 60’s, which lasted from age 19 -23. After it ended the businessman divorced. Kirk is now 26, but as most commentators to the more balanced story in Daily Mail Australia state, looks 46. She is now dead ugly, but not as ugly as the liar Clements.

The story didn’t go ahead because she demanded $100,000 which the TV network refused to pay. A typical gold digger. There was no ticket to Australia.

Liar Clements made no effort to see a copy of the ticket or email because it didn’t exist.

Liar Clements has championed a broken down model and actress, who is so unsuccessful that her power was turned off and her pilot TV show has now failed, as the proposed network has gone broke.

Kirk claims she has many death threats since propagating her lies and a large number refer to her deservedly as a gold digger.

Why liar Clements did you give no opportunity for your target to tell the truth and only wrote blatant lies. News Limited should dismiss her, Dunn and the Chief of Staff, on Saturday immediately. 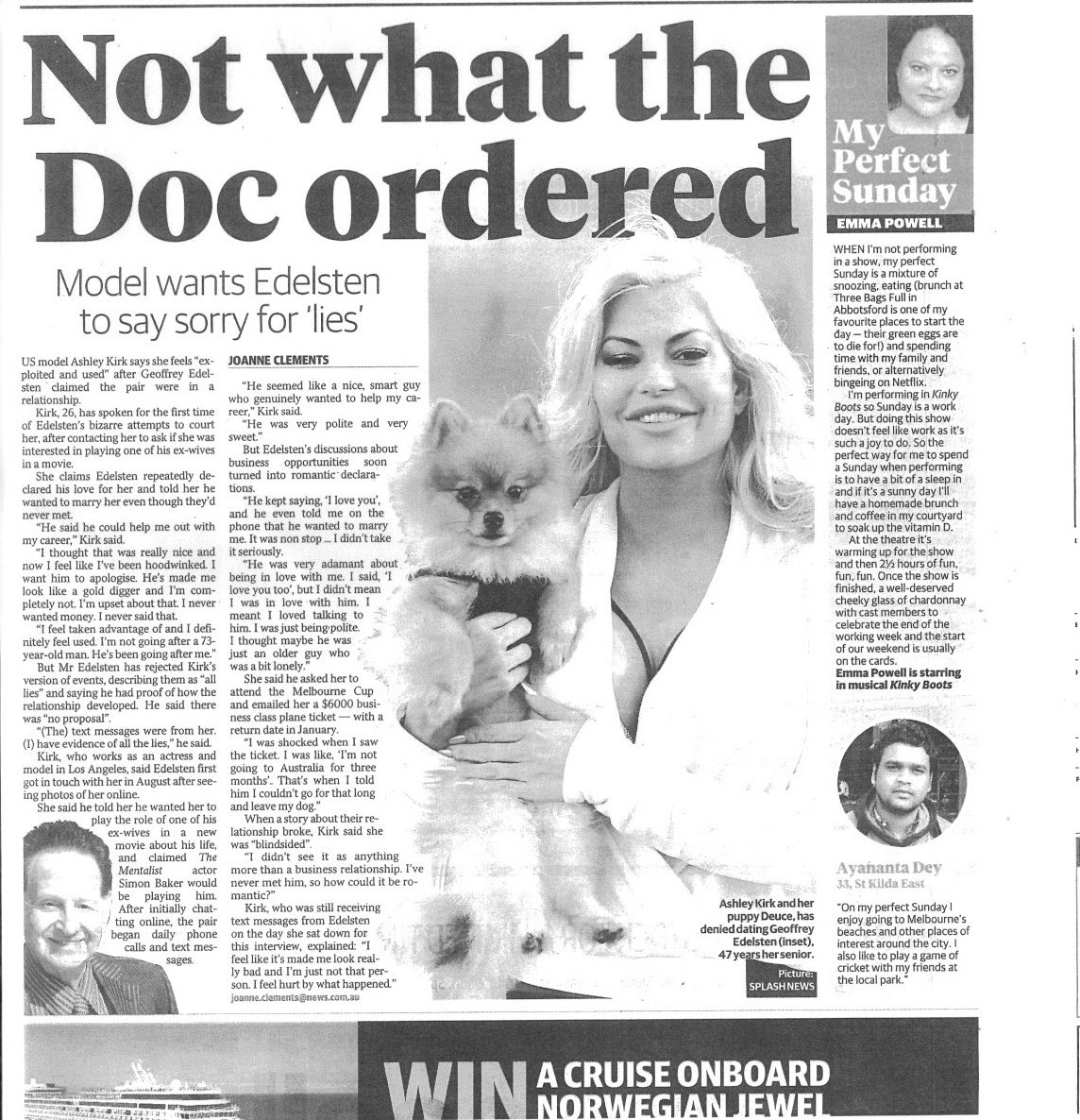 Not What The Doc Ordered

US model Ashley Kirk says “she feels exploited and used” after Geoffrey Edelsten claimed the pair were in a relationship.

Kirk, 26, has spoken for the first time of Edelsten’s bizarre attempts to court her, after contacting her to ask if she was interested in playing one of his ex-wives in a movie.

She claims Edelsten repeatedly declared his love for her and told her he wanted to marry her even though they’d never met.

“He said he could help me out with my career.” Kirk said.

“I thought that was, really nice and now I feel like I’ve been hoodwinked. I want him to apologise. He’s made me look like a gold digger and I’m completely not. I’m upset about that I never wanted money. I never said that.

“l feel taken advantage of and I definitely feel used. I’m not going after a 73- year-old man. He’s been going after me.”

But Mr Edelsten has rejected Kirk’s version of events, describing them as all

lies” and saying he had proof of how the relationship developed. He said there was “no proposal”.

“(The) text messages were from her. (I) have evidence of all the lies.” he said.

Kirk, who works as an actress and model in Los Angeles, said Edelsten first got in touch with her in August after seeing photos of her online.

She said he told her he wanted her to play the role of one of his ex-wives in a new movie about his life, and claimed The Mentalist actor Simon Baker would be playing him.

“He seemed like a nice, smart guy who genuinely wanted to help my career” Kirk said.

“He was very polite and very sweet”

“He kept saying, ‘I love you’, and he even told me on the phone that he wanted to marry me. It was non stop .. I didn’t take it seriously.

“He was very adamant about being in love with me. I said, ‘I love you too’, but I didn’t mean

I was in love with him. I meant I loved talking to him. I was just being polite. l thought maybe he was just an older guy who was a bit lonely.”

class plane ticket – with a return date in January.

“I was shocked when I saw the ticket I was like. ‘I’m not going to Australia for three months’. That’s when I told him I couldn’t go for that long and leave my dog.”

When a story about their relationship broke. Kirk said she was “blindsided”.

“I didn’t see it as anything  more than a business relationship. I’ve never met him, so how could it be romantic?”

Kirk, who was still receiving text messages from Edelsten on the day she sat down for this interview, explained; “I feel like it’s made me look really bad and I’m just not that person. I feel hurt by what happened.”