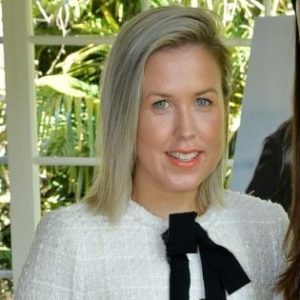 It appears that you are the responsible person for the Grecko article which has had widespread internet reports by other media sources.

I am not prepared to tolerate such unfair and biased reporting when you made no effort to contact me.  Your article which refers to me as disgraced is unacceptable and unfair.  You must be aware that two Supreme Court Judges from N.S.W. and Queensland have reported that the negative events to which you must be referring are untrue and the result of wrongful conviction.  These matters will be appealed.

It is also intolerable that you make these negative comments without any mention of the world wide award made to me and which was featured on CBS, NBC, ABC and Fox television networks as well as 440 newspapers and magazines throughout the U.S.A. and Canada.  In fact, if you have the excuse which is unacceptable that you were unaware of this, please look at

IAOTP  edelsten If in fact you do not remedy your insulting language, then I will refer this matter to Australia’s Worst Journalist where you as a known sewer rat of journalism have featured previously.

I wish you to be certain that I am not prepared to accept these insults in the absence of informed journalism making your inane story at least accurate. 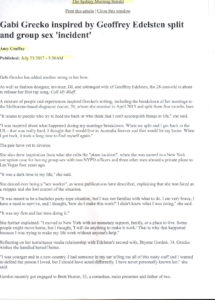 Gabi Grecko has added another string to her bow.

As well as fashion designer, invoicer, DJ, and estranged wife of Geoffrey Edelsten, the 28-year-old is about to release her first rap song, Call My Bluff.

A mixture of people and experiences inspired Grecko’s writing, including the breakdown of her marriage to the Melbourne-based disgraced doctor, 74, whom she married in April 2015 and split from five months later.

“It relates to people who try to hold me back or who think that I can’t accomplish things in life,” she said.

“I was inspired about what happened during my marriage breakdown. When we split and I got back to the US — that was really hard. I thought that I would live in Australia forever and that would be my home. When got back, it took a long time to find myself again.”

The pair have yet to divorce.

She also drew inspiration from what she calls the “plane incident”, when she was named in a New York corruption case for having group sex with two NYPD officers and three other men aboard a private plane to Las Vegas four years ago.

She denied ever being a “sex worker”, as some publications have described, explaining that she was hired as a stripper and she lost control of the situation.

“It was meant to be a bachelor party-type situation, but I was not familiar with what to do. I am very brave, I have a need to survive, and I thought, ‘how do I make this work?’ I didn’t know what I was doing,” she said.
“It was my first and last time doing it.”

She further explained: “I moved to New York with no monetary support, family, or a place to live. Some people might move home, but I thought, ‘I will do anything to make it work.’ That is why that happened because I was trying to make my life work without anyone’s help.”

“I was younger and in a new country. I had someone in my ear telling me all of this nasty stuff and I wanted to defend the person I loved, but I should have acted differently. I have never personally known her,” she said.

Gordon recently got engaged to Brett Hunter, 33, a comedian, radio presenter and father of two.